The wait was finally over! Some of Year 5, along with their parents, attended a Star Gazing evening this week, ran by the Northamptonshire Natural History Society. Thankfully, the mist that had been covering the moon disappeared just in time.

The session started at seven o’clock. Local enthusiast Nick gave a talk about some of the stars in the sky and their unusual names – along with some intriguing facts. Such as, the Earth is 8 light-year minutes away from the Sun.

After the talk, the children were lucky enough to have the opportunity to observe the moon through four different telescopes. They were told stories about theories from the past to explain the dark patches on its surface, including the Victorian belief that the moon had seas. However, they found out these patches are actually the remanence of ancient volcanoes.

Despite the cold, the children were engaged throughout the session and had lots of interesting questions. One boy said, after looking through the telescope, “Wow Mrs Williams, that has blown my mind!”. The evening end with one last question for Nick. ‘Would they find cheese when they dig up the moon?’ 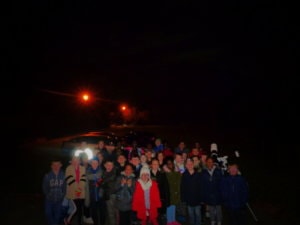