As historians, we have been learning about the Great Fire of London which began on 2nd September 1666.

We have learnt that the fire broke out in Thomas Farriner’s bakery on Pudding Lane in the very early hours of the morning. An ember/ spark jumped from the fire in the bakery and caused the fire to spread quickly!

People had to escape from their houses however they could. Thomas Farriner had to escape through an upstairs window to get away from the fire.

The fire then spread for 4 days, causing huge damage to the city of London.

There was no fire service back then and people would have to use leather buckets, forming a human chain to pass water along to each other to extinguish the fire.

The summer has been very hot and there was a strong wind blowing from the West, which also allowed the flames to jump from house to house, burning the houses to the ground as the fire continued to burn.

We have been learning all about this incredible historical event and we have used our knowledge of what happened in 1666 to try and recreate what happened during this time.

In design teams, we planned, designed and constructed our own houses in the Tudor style to try and recreate what happened during the fire.

Linking our ideas to what we have learnt as scientists about different materials and their suitability for things, we chose materials which we thought would burn easily and quickly just like it did in 1666.

On Thursday 19th November, we then selected 4 of our Tudor style houses to take outside and recreate our own Great Fire of London, so we could observe what happened. 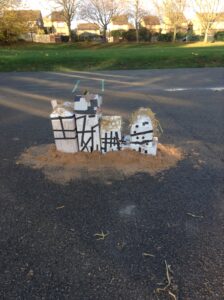 Mrs. Causebrook started the fire with a spark from a match. We then watched what happened to the flames to see whether they would jump from house to house as the fire burnt. 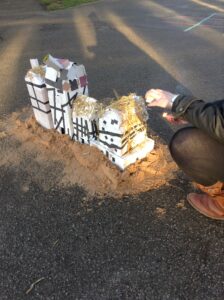 We were amazed to see what happened and how quickly the fire spread along the houses.

All of the houses were burnt to the ground in a matter of 12 minutes and the wind carried the flames from the West, just as it did in 1666! 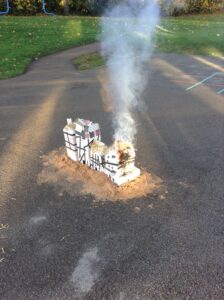 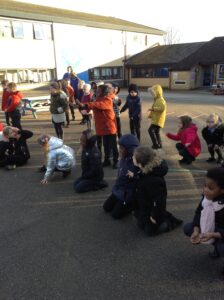 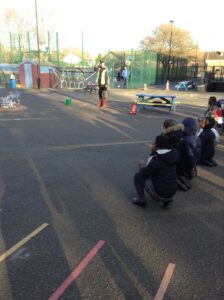 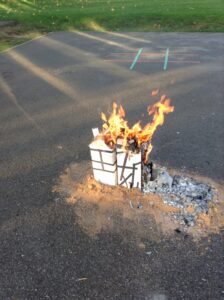 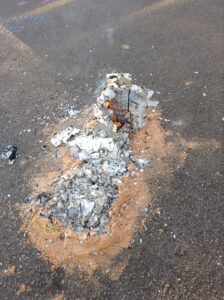 “That was amazing. I didn’t realise it would burn that quickly!”

“Some of the flames grew and grew as the wind blew stronger.”

“The flames looked like tongues flickering up from the ground.”

“My poor house. I would not have wanted to be in there when the fire happened.”

“The smoke was really smelly and would not have been nice to be near in 1666.”

“That was so exciting to see what really happened! Can we do it again?”